How Real are Documentary Films 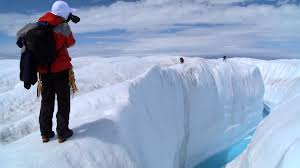 The definition of documentary is not set in stone. According to A Very Short Introduction By Patricia Aufderheide (2007), a documentary film can be “a trip to exotic lands and lifestyles…” or “a visual poem…” or even an “artistic piece of propaganda”. Simply put, a documentary is a film that evokes emotions, opinions and/or reflects real life. Yes many movies in the theatres do these things, but the difference is that in documentaries although the filmmaker can chose what he/she the subjects and situations in front of the camera they have no control of the outcomes. As stated by Aufderheide: “documentaries are about real life; they are not real life”.
As you read this blog post you are hearing my point of view on a topic. It happens when you
watch a movie or a documentary film as well. As Alfred Hitchcock said: “ In feature films the director is God; in documentary films God is the director.” So while the director has a say in what is shown, he/she cannot control the world in front of them. That being said in post the director can decide to cut or move media as he/she so chooses. This makes pretty much every documentary bias to some extent; any piece of published media is bias to the creator.

Man on Wire is a 2008 documentary film directed by James Marsh chronicling the amazing life of Philippe Petit who is a French wire walker.

documentary filmmakers must make decisions that steer the film in certain directions. Whether the filmmaker is intending to push a specific opinion or view or if it is unintentional, a documentary is always going to be subjective. Before you get all “sometimes there are documentary films that give a completely unbiased perspective on certain subjects” one must consider the following: is there such thing as a completely unbiased film that represents real life? Is life itself unbiased? How can one filmmaker separate their subconscious opinions from the decisions made during the production of a documentary film? Of course there will be fantastic filmmakers who force the audience to see all sides of a topic, but no matter what the subconscious point of view will always leak through to some extent.

Who are all of these people? Tune in to the first

check out a new episode of the transcript this fri

thanks to @that_trisaratops we have pizza this th

John editing NFL Line for this Friday. Watch The T

Lighting off rockets 🚀 check out #smartsandcraf


Error: API requests are being delayed for this account. New posts will not be retrieved.